Flattening images of curled pages, as an optimization problem.

A while back, I wrote a script to create PDFs from photos of hand-written text. It was nothing special – just adaptive thresholding and combining multiple images into a PDF – but it came in handy whenever a student emailed me their homework as a pile of JPEGs. After I demoed the program to my fiancée, she ended up asking me to run it from time to time on photos of archival documents for her linguistics research. This summer, she came back from the library with a number of images where the text was significantly warped due to curled pages. 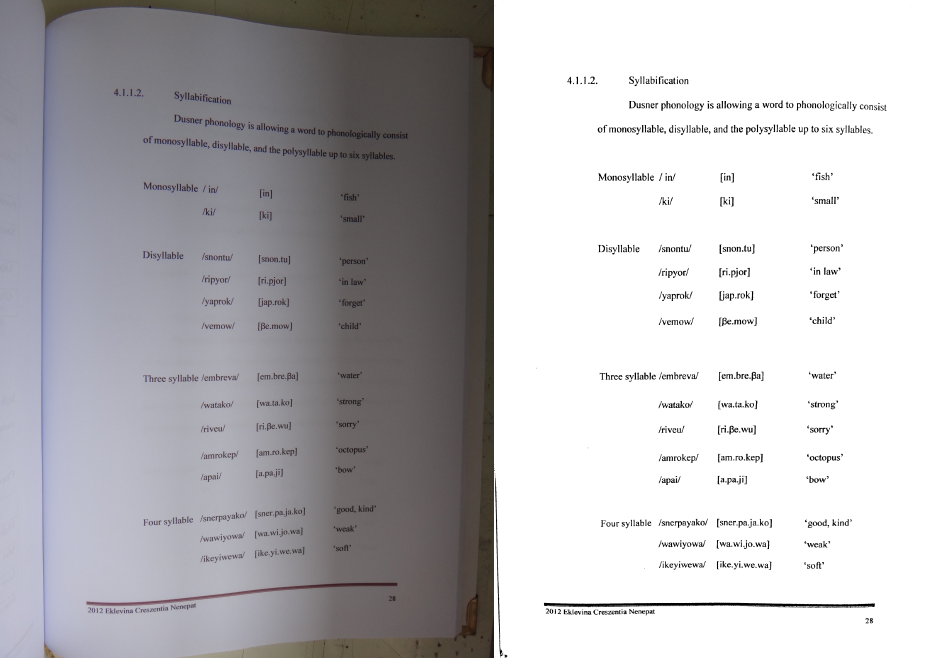 As with every project on this blog, the code is up on github. Also feel free to skip to the results section if you want a sneak peek of some more before-and-after shots.

I am by no means the first person to come up with a method for document image dewarping – it’s even implemented in Dan Bloomberg’s open-source image processing library Leptonica – but when it comes to understanding a problem, there’s nothing quite like implementing it yourself. Aside from browsing through the Leptonica code, I also skimmed a few papers on the topic, including a summary of the results of a dewarping contest, as well as an article about the contest-winning Coordinate Transform Model (CTM) method.

Both the Leptonica dewarping method and the CTM method share a similar hierarchical problem decomposition:

To me, Leptonica’s approach to the second subproblem seems a bit ad-hoc compared to CTM’s 3D “cylinder” model. To be honest, I had a bit of trouble deciphering the CTM paper, but I liked the idea of a model-based approach. I decided to create my own parametric model where the appearance of the page is determined by a number of parameters:

The page’s 3D shape comes from sweeping a curve along the local \(y\)-axis (top-to-bottom direction). Each \(x\) (left-to-right) coordinate on the page maps to a displacement \(z\) of the page surface. I model the horizontal cross-section of the page surface as a cubic spline whose endpoints are fixed at zero. The shape of the spline can be specified completely by its slopes \(\alpha\) and \(\beta\) at the endpoints: 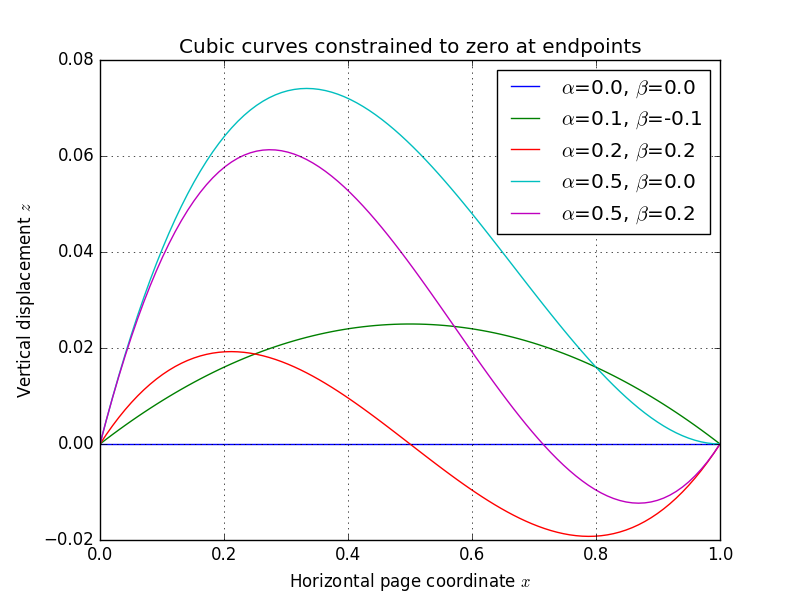 As the plot shows, changing the slope parameters gives a variety of “page-like” curves. Below, I’ve generated an animation that fixes the page dimensions and all \((x, y)\) coordinates, while varying the pose/shape parameters \(\mathbf{r}\), \(\mathbf{t}\), \(\alpha\), and \(\beta\) – you can begin to appreciate that the parameter space spans a useful variety of page appearances:

Importantly, once the pose/shape parameters are fixed, each \((x, y)\) coordinate on the page is projected to a determined location on the image plane. Given this rich model, we can now frame the entire dewarping puzzle as an optimization problem:

Here is an illustration of reprojection before and after optimization: 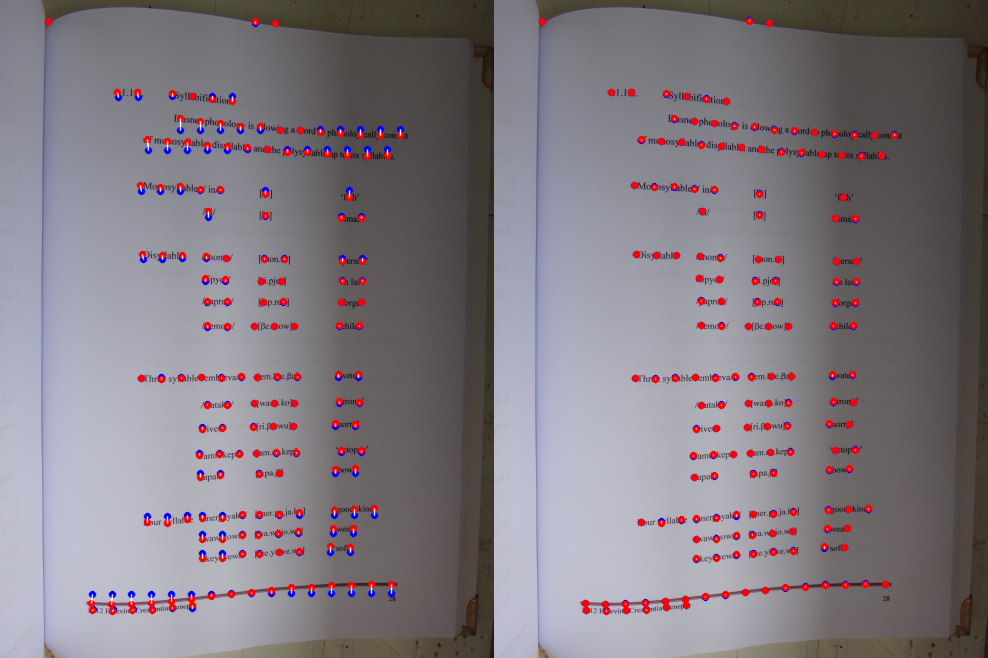 The red points in both image are detected keypoints on text spans, and the blue ones are reprojections through the model. Note that the left image (initial guess) assumes no curvature at all, so all blue points are collinear; whereas the right image (final optimization output) has established the page pose/shape well enough to place almost all of the blue points on top of each corresponding red point.

Once we have a good model, we can isolate the pose/shape parameters, and invert the resulting page-to-image mapping to dewarp the entire image. Of course, the devil is in the details.

Here is a rough description of the steps I took.

I’ve included several example images in the github repository to illustrate how the program works on a variety of inputs. Here are the images, along with the program output: 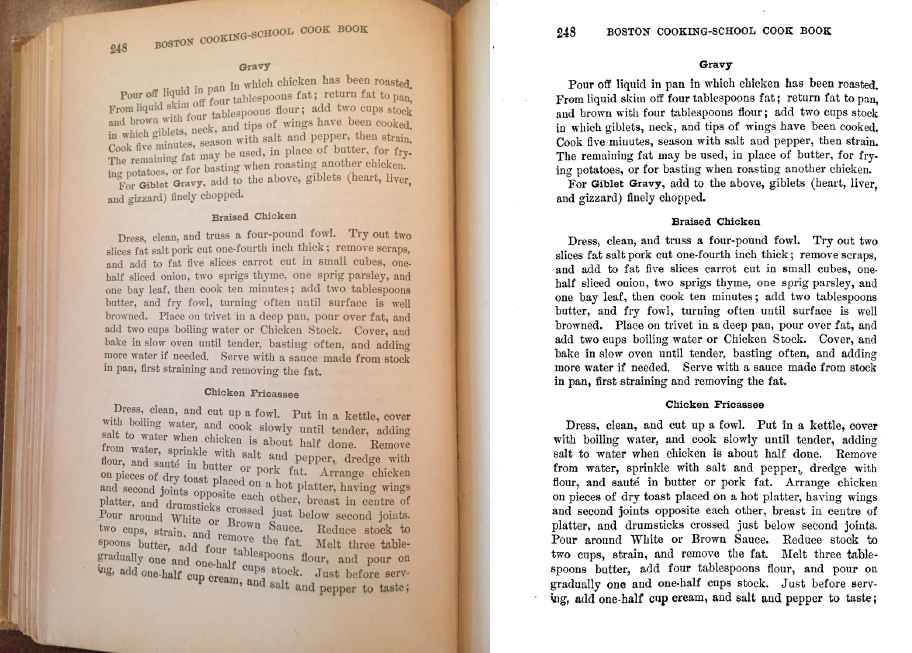 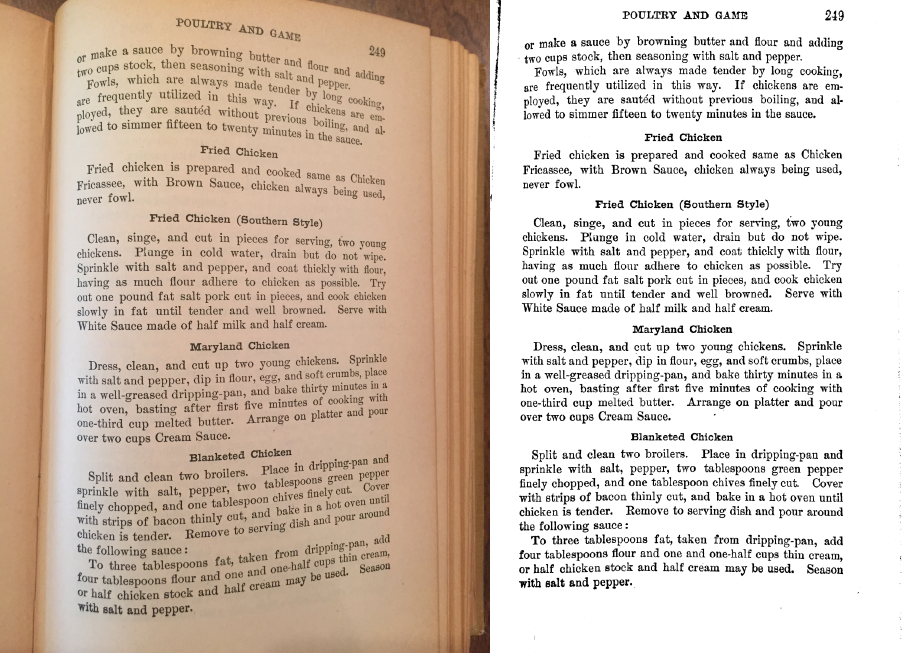 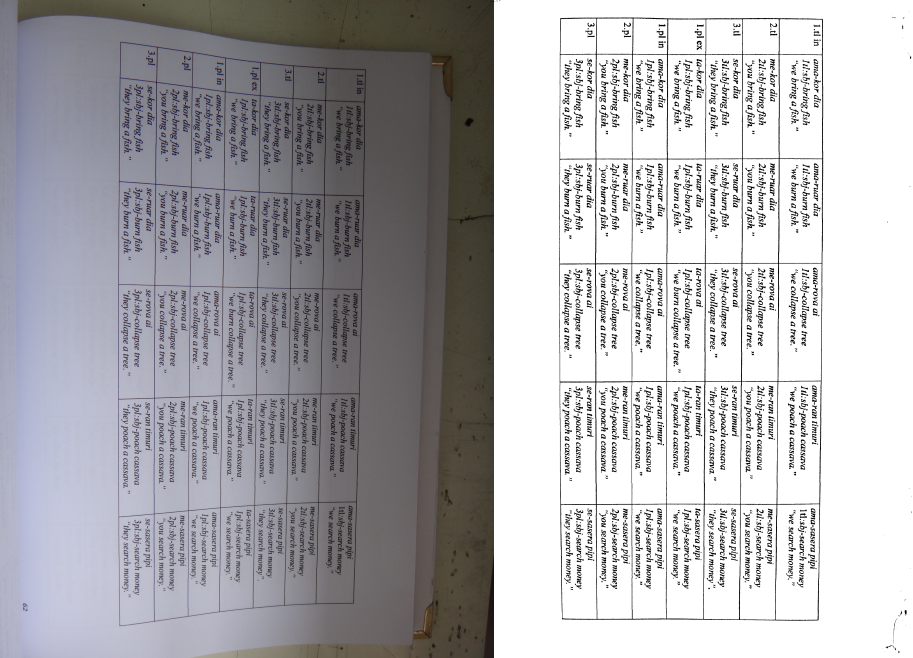 I also compiled some statistics about each program run (take the runtimes with a grain of salt, this is for a single run on my 2012 MacBook Pro):

You can see these are not exactly small optimization problems. The smallest one has 89 parameters in the model, and the largest has 600. Still, I’m sure the optimization speed could be improved by trying out different methods and/or using a compiled language.

The way this project unfolded represents a fairly typical workflow for me these days: do a bit of reading to collect background knowledge, and then figure out how to formulate the entire problem as the output of some optimization process. I find it’s a pretty effective way of tackling a large number of technical problems. Although I didn’t think of it at the time, the overall approach I took here is reminiscent of both deformable part models and active appearance models, though not as sophisticated as either.

Both Leptonica and the CTM method go one step further than I did, and try to model/repair horizontal distortion as well as vertical. That would be useful for my code, too – because the cubic spline is not an arc-length parameterization, the text is slightly compressed in areas where the cubic spline has a large slope. Since this project was mostly intended as a proof-of-concept, I decided not to pursue the issue further.

Before putting up the final code on github, I tried out using the automated Python style checker Pylint for the first time. For some reason, on its first run it informed me that all of the cv2 module members were undefined, leading to an initial rating of -6.88/10 (yes, negative). Putting the line

near the top of the file made it shut up about that. After tweaking the program for a while to make Pylint happier, I got the score up to 9.09/10, which seems good enough for now. I’m not sure I agree 100% with all of its default settings, but it was interesting to try it out and learn a new tool.

I do all of my coding these days in GNU Emacs, which usually suits my needs; however, messing around with Pylint led me to discover a feature I had never used. Pylint is not fond of short variable names like h (but has no problem with i, go figure). If I use the normal Emacs query-replace function bound to M-% and try to replace h with height everywhere, I have to pay close attention to make sure that it doesn’t also try to replace the h other identifiers (like shape) as well. A while back, I discovered I could sidestep this by using query-replace-regexp instead, and entering the regular expression \bh\b as the replacement text (the \b stands for a word boundary, so it will only match the entire “word” h). On the other hand, it’s a bit more work, and I thought there must be a better place to do “whole-word” replacement. A bunch of Googling led me to this Stack Exchange answer, which says that using the universal-argument command C-u in Emacs before a query-replace will do exactly what I want. I never knew about universal-argument before – always good to learn new tricks!

At this point, I don’t anticipate doing much more with the dewarping code. It could definitely use a thorough round of commenting, but the basics are pretty much spelled out in this document, so I’ll just slap a link here on the github repo and call it a day. Who knows – maybe I’ll refer back to this project again the next time I teach computer vision…

This looks like it was a great project, thanks for sharing it! It would be interesting to see how it performs with a high resolution, well illuminated page. Since the code is open maybe I'll give it a shot. :)

Consider mentioning Dan Bloomberg as the author of the original work as well as Leptonica. :)

I am the Supreme Idiot. Hi! Could you turn this into a EXE that would execute on Windows 7? What in the world are Py files?
TIA
scult1@gmail.com

.py are Python source code files. If you install Python for Windows then you can run them.

Actually `universal-argument` is used quite a lot in places where you want to alter the original command slightly. I'm using [Spacemacs](https://github.com/syl20bnr/sp... though and I'm used to performing a Vim-style replacement which automatically utilizes regex syntax.

Pylint is very opinionated and overwhelms one with false-positive warnings when used out of the box, without a custom configuration file.

Pyflakes is gentler. (I tend to use flake8 because it augments pyflakes with a config file letting you disable some warnings, but flake8 also pulls in pep8 which nitpicks my style in a bit too rigid way.)

Thanks - maybe I'll check it out on my next Python project.